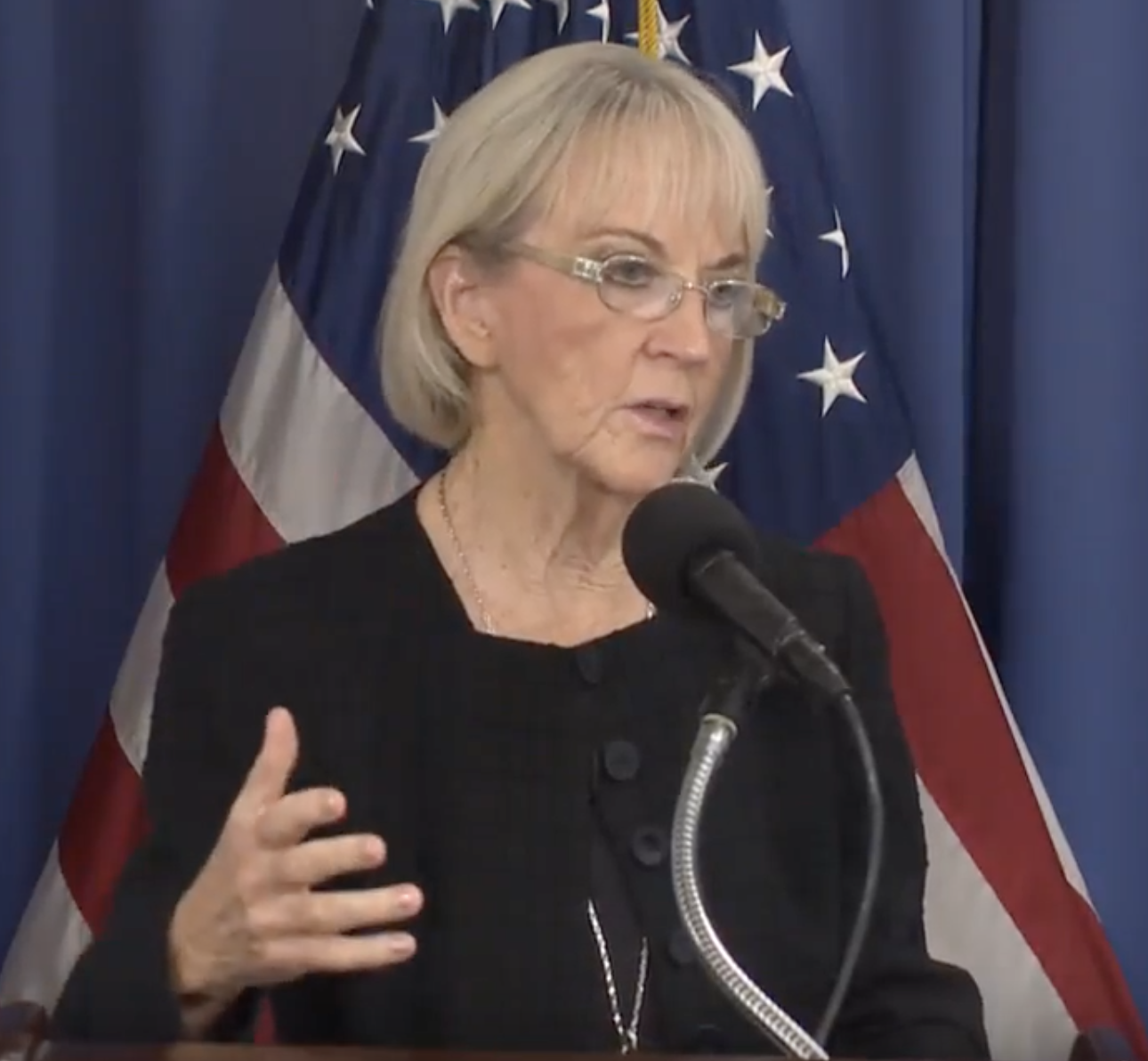 Presentation of advances from the groundbreaking I-SPY 2 TRIAL.

Washington, D.C., September 12, 2018–Quantum Leap Healthcare Collaborative™ (QLHC), a non-profit organization and sponsor of the I-SPY 2 TRIAL™, today presented for the first time at the National Press Club, an overall view of the remarkable progress achieved by the I-SPY 2 clinical trial in improving the outcomes of early stage, breast cancer patients who are at high risk for early recurrence.  I-SPY 2 is also impacting far beyond breast cancer by increasing efficiencies that promise to accelerate the development and delivery of more effective therapies for other cancer types and a range of other diseases.

Read the press release on PRNewswire

It is estimated that 266,120 women and 2,550 men will be diagnosed with breast cancer in the United States this year and 40,290 will die from their disease. Ninety-five percent of breast cancer diagnoses are defined as “early stage”.  Of these, 62 percent of these breast cancers are confined to the primary site and 31 percent have spread to regional lymph nodes.  The risk of recurrence depends on several factors, but approximately 25 percent of patients (65,000/year) will be told that their risk of early recurrence is high.  I-SPY 2 set as its goal to prevent recurrence in these early stage high-risk patients – and to ultimately cure as many of these cancers as possible.

“I-SPY 2 was a direct result of having spent much of my career trying to improve the outcomes of women with these early stage (potentially curable) aggressive breast cancers. Introducing new therapies before surgery (neoadjuvant therapy), allows us to use imaging and pathology (early endpoints) for assessing response to predict outcomes, and using biomarkers to subtype patients and personalize therapies. These are only a few of the innovations that are improving survival in these patients and accelerating change – and uniting clinical research and patient care,” said Dr. Laura Esserman, founder and Co-Principal Investigator of I-SPY 2, Director, Carol Franc Buck Breast Care Center, University of California, San Francisco (UCSF).

Launched in 2010 through the Foundation for the National Institutes of Health (FNIH) and subsequently transferred to Quantum Leap Healthcare Collaborative (QLHC), I-SPY 2 was created by a multi-sector collaborative consortium. The overall goal of the trial was to personalize treatment for each patient using biological characteristics, known as biomarkers, to determine each patient’s subtype of breast cancer. The trial features an innovative adaptive statistical design where every patient’s data contributes to what is in effect, a learning system.  I-SPY 2 is performed through an FDA master protocol that enables numerous efficiencies where breast cancer physicians and translational scientists work together with pharmaceutical and biotechnology companies, as well as with patient advocates, in an unprecedented pre-competitive collaboration.

"I-SPY 2 is the longest running of these adaptive platform trials and its many successes come from the design, collaboration under a master protocol, and a number of other unique features that creates a sustainable learning system.  Development of new therapies will become more patient-centric and efficient as companies and organizations adopt these trials," said Dr. Janet Woodcock, Director of the FDA Center for Drug Evaluation and Research.

Thus far, I-SPY 2 has enrolled more than1300 patients at 16 U.S. sites and by the end of 2018 some 17 drugs will have entered the trial and 12 will have completed evaluation. To date, 7 drugs have graduated from the trial – with 2 receiving accelerated approval and one gaining breakthrough designation by FDA.  The design of I-SPY 2 allows the network to evaluate up to 5 investigational therapies in parallel – which means more data is available for the algorithms that drive the trial to ensure that each patient receives the therapy that is best for their disease.

“The I-SPY 2 design is transformative in that patients receive therapies that are most likely to work for them because the design algorithms learn which patients benefit from which therapies and minimizes exposure to drugs that are less likely to benefit them.  Successful therapies can then “graduate” from the trial and those that are ineffective can be dropped which create more efficient and safer trials,” stated Dr. Donald Berry, Co-Principal Investigator, I-SPY 2, Professor, University of Texas MD Anderson Cancer Center.

Innovations deriving from the I-SPY 2 trial are improving clinical trials and patient care on many levels and a number of these advances have become best practices. “Use of multiple magnetic resonance images (MRI) and other biomarkers to power algorithms that predict a patient’s pathologic complete response (pCR), means that we have an early endpoint in I-SPY 2 that is an excellent predictor of long term outcomes in high risk patients,” offered Dr. Angela M. DeMichele, I-SPY 2 TRIAL Clinical Trial Operations Working Group Chair, Professor in Breast Cancer Excellence at the Perelman School of Medicine at the University of Pennsylvania.

“As a patient who fell into this early stage, high-risk breast cancer group, I knew that I-SPY 2 offered me the best opportunity to receive new therapies (including immunotherapies, drugs, and combinations) beyond cytotoxic chemotherapy and that it would provide a better chance of minimizing recurrence of my cancer,” said Vidya Balakrishnan, former I-SPY 2 TRIAL participant; Senior Director, Q Branch, Salesforce.  “It incorporates what we know about my disease with the best of advanced technologies, plus I-SPY 2 learns from every patient for the benefit of the next patient.”

The next phase of I-SPY 2 is just getting underway. There are plans to further adapt treatment with multiple goals: achieving a pCR for every patient in the trial, reduce toxicity of all agents entering the trial, and continuing to engage patients through patient reported outcomes to further reduce cycle times for I-SPY 2. The time to develop effective, less toxic regimens and therapies can be reduced as can the costs of trials.

“Having been involved with I-SPY 2 from its beginning, I believe that I-SPY 2 represents a new generation of clinical trials that puts patients and their specific disease at the center of what I really a “smart trial”.  It has already served as the prototype for new adaptive platform trials in pancreas and glioblastoma as well as other diseases such as Alzheimer ’s disease.  This is the future of clinical trials for many reasons, but the best news is that it is preventing disease progression, curing more patients, and brings the best of what we learn in research to clinical care,” said Anna Barker, Chair of the I-SPY 2 Oversight Group, Board Member, Quantum Leap Healthcare Collaborative and Co-Director and Professor at Arizona State University.

Quantum Leap Healthcare Collaborative is a 501C(3) charitable organization established in 2005 as a collaboration between medical researchers at University of California, San Francisco and Silicon Valley entrepreneurs. Our mission is to integrate high-impact research with clinical processes and systems technology, resulting in improved data management and information systems, greater access to clinical trial matching and sponsorship, and greater benefit to providers, patients and researchers. Our goal is to improve and save lives. Quantum Leap provides operational, financial, and regulatory oversight to I-SPY. For more information, visit https://www.quantumleaphealth.org/.