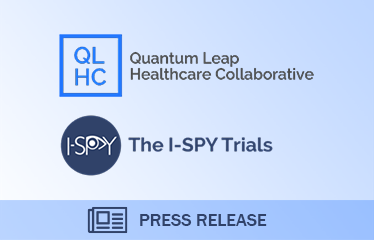 The new I-SPY 2 treatment arm will evaluate SYD985 against standard of care therapy in Stage II/III early-stage, high-risk breast cancer patients, with a focus on tumors with heterogeneous and low HER2 expression. Byondis will supply the investigational drug and provide financial and regulatory support. Quantum Leap, as sponsor, will provide the clinical sites and clinical expertise.

According to Byondis’ CEO Marco Timmers, Ph.D., “We are pleased to collaborate with Quantum Leap, the FDA and other key stakeholders to study the potential of ADC SYD985 as a neoadjuvant therapy in a wider spectrum of breast cancer tumors. Our hope is that we can improve on current disease outcomes for cancer patients in an early stage of disease.”

SYD985 is Byondis’ most advanced ADC, targeting a range of HER2-positive cancers such as metastatic breast cancer (MBC) and endometrial (uterine) cancer. The company is currently conducting a Phase III study of SYD985 (TULIP® or SYD985.002) to compare its efficacy and safety to physician's choice treatment in patients with HER2-positive unresectable locally advanced or metastatic breast cancer. Previously, the FDA granted fast track designation for SYD985 based on promising data from heavily pre-treated last-line HER2-positive MBC patients participating in a two-part Phase I clinical trial (SYD985.001).

About Syd985, A Next Generation Antibody-Drug Conjugate

SYD985 is comprised of the monoclonal antibody trastuzumab and a cleavable linker-drug called valine-citrulline-seco-DUocarmycin-hydroxyBenzamide-Azaindole (vc-seco-DUBA). The antibody part of SYD985 binds to HER2 on the surface of the cancer cell and the ADC is internalized by the cell. After proteolytic cleavage of the linker, the inactive cytotoxin is activated and DNA damage is induced, resulting in tumor cell death. SYD985 can be considered a form of targeted chemotherapy.

Monoclonal antibodies are created to allow improved specificity by targeting receptors expressed on tumor cell membranes. To improve the cell-killing capability of antibodies, cytotoxic drugs can be attached to the antibodies using a linker molecule, forming antibody-drug conjugates or ADCs.

While earlier generation ADCs improved targeting and cell killing, they can be unstable in the bloodstream, and that can lead to an early release of the cytotoxic payload, impacting healthy tissue and narrowing the therapeutic window. Byondis’ next generation ADCs carry an intricate, inactivated cytotoxic drug that rapidly self-destructs in case it is prematurely released, limiting damage to healthy tissue and improving the therapeutic window.

Byondis’ differentiated linker-drug, vc-seco-DUBA, owes its potent antitumor activity to a synthetic duocarmycin-based cytotoxin. Duocarmycins, first isolated from Streptomyces bacteria in the 1970s, bind to the minor groove of DNA and disrupt the nucleic acid architecture, which eventually leads to tumor cell death.

The unique design of the selectively cleavable linker connecting the antibody to the duocarmycin drug leads to high stability in circulation and induces efficient release of the cytotoxin in the tumor. Uptake of the activated payload by neighboring tumor cells with lower HER2 expression improves the efficacy potential, the so-called bystander effect.

For information about the I-SPY Trials visit www.ispytrials.org